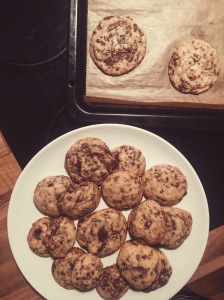 Perhaps it’s because Sunday’s weather finally broke the barrier of 70 degrees Fahrenheit, but as I’m reflecting back on my week- I can’t help but feel a deep sense of satisfaction. Earlier yesterday, I dropped off a friend by the bus station. My thoughts, as you can imagine, are mostly focused on what a fun time I had on Saturday. We walked for… 19.75 kilometers (and for those Americans, that’s around 12 miles). I made breakfast for my guest, while my host traits cried out in happiness. Because what’s better than baking bread and hard boiling eggs for friends? Other than baking awesome chocolate chip cookies with them? But anyways… I found a great used bookstore and ahem may have splurged on three new old books. I’m not too ashamed. I picked up Team of Rivals: The Political Genius of Abraham Lincoln by Doris Kearns Goodwin, Dreams Of My Father by Barack Obama and The Year of the Flood by Margaret Atwood.

I realize that I haven’t finished basically any of the books I own… Armada by Ernest Cline is definitely something I want to finish before starting on the brick of a book that is Lincoln. There’s something about a used bookstore though, that completely changes my plans for reading. I can’t help sulking around and then making a sound kind of like a dying cat whenever I find something for me. Like I said- not ashamed.

In other news, I finally have started in the spring cooking season. Earlier in the week I made a super simple dish for grilled asparagus, and it was delicious. To be clear, it was as simple as washing, chopping garlic, onions and asparagus and some tomatoes- and popping them in the oven for around 30 minutes at 200ish degrees Celsius, and adding feta cheese after the fact. Add some white wine and you are set for pretending it’s already June. In an attempt to quench my sweet tooth, I also managed to do what probably every other cook already knew. I sautéed some pears in cinnamon and butter… And excuse my language but holy shit. How dare that be as good as it was. I can only imagine drizzled dark chocolate on top (I daren’t). The only choice is what to make this week to somehow to top that? Hmm, any ideas?

Now that I’m writing about this week, I realize there’s almost enough to say that I don’t have to wrack my brain for ideas. That’s a rarity. It might help that I’ve finally gotten my writing act together and averaged around 15 minutes of writing a day (granted its on the elliptical, but it still counts). If I ever write anything worth the reading time of others, I’ll be sure to post (but let me get at least 10,000 words into something first).

Otherwise? It was work, work, workout, workout, work. But I think those weeks are my favorites, because it gets at least me in a pump-up POWER Kanye West mood. Hopefully I’ll budget more of my time to read next week… Or at the very least finish Armada and begin my reading for journalism classes. Anything interesting happen in your week? Let me know in the comments?

P.S: If I recorded myself talking full-nerd out about Hamilton for a super short podcast style thing, would anyone other than myself listen to it? (Just wondering…)

Obviously this is a super basic chocolate chip recipe, but I absolutely LOVED the way mine came out. We started out by creaming the butter and the sugars together (by the way… I could just eat that and it would be fine). Then, beat in the vanilla extract and egg, and mix in the dry ingredients (flour, salt and backing soda). The last step is to add chocolate chips… If you are like me and in Germany, you have realized that this point is a bit difficult, given that it’s really hard to find chocolate chips. So, what you can do instead, is grab a block of baking chocolate and chop it finely. It’s delicious, and the cookies are much more chocolately for it. End stage: 175 degrees Celsius for 8-10 minutes and eat.